In honor of Halloween, does anyone have any personal ghost experience stories to share? We’d LOVE to hear them! Please comment!

I’ll tell you about my experiences when I visited the Eastern State Pen. Nothing astronomical happened, but I thought it was pretty creepy! 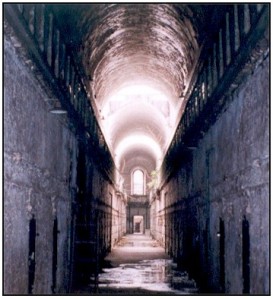 I had never been to Philly before, and was sent there back in 2005 by my place of work to attend the annual ADA Convention. It was a cold and rainy October Sunday, and the LAST thing I wanted to do was work the large floor of the Philly Convention Center, talking to a bunch of self-absorbed salesman and dentists, so the Hubby and I decided to tour the city with what little time we had! We started the day off by attending the 9am service at a very old, perfectly Revolutionary white chapel. Then we did the typical tourist thing, seeing the old grave yards and the Bell. Then, my husband suggested we drive out to Eastern State Pen for a quick tour before heading home. Being the little horror-wench that I am, I was eager!

The stone façade was imposing as we pulled the car up and parked on the street. It was kind of weird because it was in this nice, quaint neighborhood of brick home and smack dab in the middle was this HUGE, darkly imposing stone prison! I know I wouldn’t want to live across the street from it! Anyway, we went through the front gates into the gift shop area where you purchase your tickets to go inside and obtain you headphones for the oratory tour, provided in the voice of Steve Buscemi.  And then we entered into the prison itself. There was a junction of several hallways, so we picked one and went. Now, this was mid-October and in the evenings during October, the prison hosted a haunted house type thing. Inside several of the dilapidated cells were decorations and such, which I felt actually detracted from the “natural” experience.

As we walked down the row of cells, approaching a set of steel stairs up to the second level of cells, my skin began to prickle and I felt extremely uneasy. Everyone before us was climbing the steps eagerly, as was my husband. I stopped at the bottom, one foot on the step and looked up. I had this overwhelming sensation to NOT go up there, that something extremely malevolent was up there! I told my husband to promptly get his butt back down to the ground floor and we were moving on! He knows how I am, that I have always been able to “sense” things that most others can not, so he didn’t argue and we continued exploring the other cellblocks.

Eventually, we ended up outside where there were some outer buildings to explore. We were able to go into Death Row, but not the area where they actually did the executions, which was a bit of a disappointment. I highly suspected to feel something creepy in the Death Row area, but left VERY disappointed that I did not. It was at this point that we saw the Port o’ Potty and decided it was time for a quick break. I went first and then was left to stand in the yard, underneath the looming guard tower in the grey drizzle to wait for my husband. It was chilly, and we had been out in the chill for at least 20 minutes by then, but suddenly a HUGE chill rushed through me, and my eyes instantly went up to the guard tower. It felt like I was being watched, even though that was ridiculous. Directly across from me in the wall was the doorway to the guard tower and that in itself started to freak me out. There was just something VERY WRONG with this area and I just knew I needed to be away from it. I moved closer and closer to the Port o’ Potty, silently rushing my husband out. It seemed like it took him a hour, but it was actually probably 2 minutes max! Whatever it was, it was WAY too long for my liking! I quickly rushed him back inside, and by that time was ready to get out of there!

Back in Baltimore that following week, during a lull at work, I pulled up the prison on Google and was greeted with all the ghost stories surrounding it. One of the ghost shows on TV, Ghost Hunters I think it was, had done a show at the prison and supposed caught the image of a mysterious “cloaked phantom” up on the second row of cells. It ran down the walkway toward the camera then back, seemingly at lightning speed. There were several theories to prove it real and also to dispel it, but it supposedly happened in the very cell block where I had originally felt my first bout of fear. Do I think the image was real? I don’t know. Do I think something EVIL resides in that cell block? ABSOLUTELY!

I then continued digging, specifically looking for info on that damned guard tower! Come to find out, there had been many reported sightings of a ghostly figure that would look down on the courtyard from the guard tower. It is believed the be the spirit of a guard who had been murdered by a prisoner trying to escape. Several incidents have bee reported to have occurred during attempted tours of the guard tower, including people being shoved down the stairs by invisible hands!

Prior to my visit to Philly, I had never even HEARD of Eastern State Penn, much less had the forethought to investigate its ghost history prior to visiting. All I had to go on were my instincts and intuition. And I KNOW I felt things there that were later corroborated, so how can I dismiss them as malarkey?

My final opinion of ESP is that YES it IS haunted, and rightly so because it was a horrible place to be imprisoned. I credit my visit that day to my eventual desire to become a ghost hunter and for the hunger I now have to make REAL, CONCRETE contact with spirits. I would also recommend a tour to anyone who thrives on the thrills and chills of the paranormal, or even those who have a great love of history.

In conclusion, I’d like to thank you for allowing me to regale you with my prison ghost story and I hope it sparked some interest in you to possibly visit the prison in the future. You can visit the official webpage for information: http://www.easternstate.org. Tomorrow, I’ll tell you the tale of the time I visited the ghosts of the USS Wisconsin, stationed in Norfolk, VA!

Photos courtesy of: http://www.prairieghosts.com/eastern.html (another great site to visit for info!)